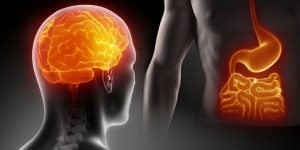 You’re probably aware that the food you eat effects the way you feel in the short term. You know that if you eat pizza and ice cream you’re going to feel bloated and lethargic shortly after.

But what you probably don’t know is that the food you eat plays a major role in your brain health, mood and the function of your immune system.

Say what? WHAT! Check this…

Your gut (the tunnel that runs from your esophagus to your anus) is made up of hundreds of trillions of bacteria.

This bacteria has many benefits. For one, it fights off the overgrowth of fungus like candida. It also supports your immune system by reinforcing the barrier of the intestinal lining and lowers the chances of the “bad” bacteria getting into your blood stream.

In addition to immune support and fighting off nasty fungal infections, your gut microbiome plays a major role in brain health.

Your gut is  known as your “second brain” due to the fact that your intestines actually have their own nervous system consisting of about 100 million neurons which are typically associated with the brain. That said, the bacteria in your gut has direct communication with the brain. Within your intestines, there are more than 100 trillion microbes (microorganism like bacteria) which make up our gut microbiome.

Your diet, lifestyle and antibiotic use have a huge impact on the health of your gut microbiome. Science has shown that the gut microbiome will impact our behaviors, thinking, and predisposition to a variety of brain disorders. A healthy gut ratio should be about 85% good bacteria to 15% bad. When this ratio gets out of whack our gut microbiome can become dysfunctional, which has shown to be a root cause in anxiety, depression,  ADHD and even play a role in personality traits. 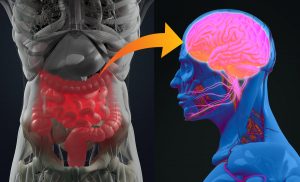 Eating too much sugar, processed foods and frequently taking antibiotics when they’re not absolutely needed wreak havoc on your gut microbiome. Shit foods will allow for the bad bacteria to thrive and take over the bad to good bacteria ratio.

Antibiotics will destroy ALL bacteria, which can allow for fungal overgrowth AND the bad bacteria to again, eventually take over your gut. Of course there are times where we absolutely need antibiotics to survive, or to kick a nasty infection. Those are the times where we need them. However, there are many people who pop antibiotics for any little cold they come down with (and unfortunately doctors who overprescribe them). That’s where it gets bad.

Another thing that many people don’t realize is how bad ibuprofen, aspirin and naproxen pain relievers wreck your gut. These pain relievers have been found to disrupt your digestive flora and intestinal mucus. So if you’re one of those people who pop an ibuprofen for every little headache, ya gotta knock that shit off ASAP!

With all of that said, you must improve the health of your gut through the foods that you eat. The first step is cutting out all of the crap like sugar, flour and other inflammatory foods, and beverages like alcohol.

Then, you can add in a variety of fermented foods that will actually improve your gut and add more good bacteria to your army for gut health. They are, Greek yogurt, Kefir, kimchi, sauerkraut and kombucha to name a few that I personally eat and drink. I also suggest supplementing daily with a quality probiotic.

The foods you eat (and don’t eat) and beverages you drink play a major role in your health and longevity. I want you to understand that good nutrition isn’t only about improving the way you look. It is necessary to improve your life.

Be very mindful of everything that you consume and be conscious of the effect it will have on the health of your gut.