Use Accommodating Resistance to Smash Through Plateaus 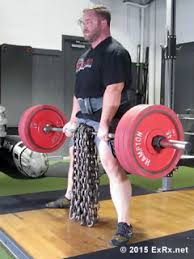 Most of the material I write about is to help hard gainers pack on size and strength. That’s because over the years I have helped a countless number of athletes and skinny dudes get bigger and stronger.

I myself am a hard gainer so that organically became my specialty over the years and I made a career of it.

However I have also worked with plenty of advanced guys and gals who are already jacked and strong. Those who want to take it to the “next level” if you will.

If you’ve been training for some time and have a goal of adding some more weight to the bar, then this is definitely the article for you. I am about to teach you how to smash through training plateaus and help you add some poundage to your main lifts.

Remember, no one wants to be jacked and weak. It’s time to get strong as shit, and this is how you’re going to do it!

Every lifter hits a plateau at one point or another. Most end up getting frustrated or just think that they have hit their peak. And maybe they did, at least for now.

But there is a proven method used by some of the strongest lifters in the world to help you get over that hump. That is, using accommodating resistance.

What the fuck is that, you ask?

This became popularized by Louie Simmons at Westside Barbell and used by plenty of world’s strongest competitors. 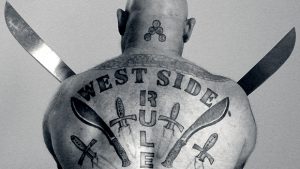 Chains are added to the barbell sleeves to create a heavier top position. Using a squat as an example, the bar actually deloads as you begin to descend as more chain piles onto the floor, making the bar lightest in the bottom position. As you come back up the bar gradually gets heavier again as the chain comes off of the floor. Making it heaviest in the top position.

Since the bar is lightest in the bottom position, and gets heavier as you come back up, it teaches us to break through the sticking point of the movement. Sticking points are where the bar typically slows down for the lifter, or they “get stuck” in the lift.

Since you know the bar will be getting heavier as you come out of the hole, you will have to learn to accelerate out of the bottom. Faster acceleration will lead to more bar speed, which will help us break through our sticking points. When you progress using accommodating resistance, you will learn to produce more force out of the hole and that will eventually lead to a bigger lift. 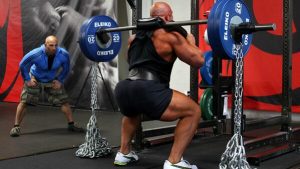 Bands are the same concept. Only now we are accommodating the bar weight with band tension. The training effect is similar to what I just explained when using chains. Only now, you will have to learn to accelerate much faster because you will have to overcome the added band tension with more speed than you would chain.

Simply put, bands and chains are adding more weight or tension at the top of the lift which forces you to accelerate the bar faster. You’ll then be hitting those sticking points with more acceleration which can help you overcome them.

But it isn’t only about the acceleration of the lift. Bands and chains also teach us to decelerate the bar as well. The added weight or tension in the top position forces us to stay tight and control the eccentric (or lowering portion) more. When we have better control during the eccentric and then we reach the deloaded bottom position, we can learn to move the bar faster during the concentric phase.

This makes bands and chains a tremendous tool for developing strength. However they can’t be used exclusively. Here’s why.

With that said, on days that you’re accommodating resistance it’s important to remember that we don’t want to use weights that are way too light because that will sacrifice our maximal strength.

You also don’t want to use a weight that’s too heavy because the bar speed will be too slow to develop adequate acceleration.

That said, you typically want to use about 65-75% of your 1RM when selecting your bar weight. Then only use up to 20% of the total bar weight in either chain weight or band tension.

For example, if your 1RM on the squat is 400lbs, 75% of that is 300lbs. 20% of 300lbs is 60lbs. That means I would load the bar with 300lbs and then add up to 60lbs in either chain weight or band tension. Band tension can get a little confusing but there are charts that give you the specific band tension poundage. You can head to elitefts.com to find out more of the specifics.

Nothing is more frustrating than seeing people use chains improperly. Some people randomly slap chains on the bar and just think they’re used because it looks cool. Please don’t be that guy. What you want to do is get a light feeder chain. This is the chain that you attach to the barbell sleeve and connect the heavier chain to it. The heavier chain should have about 1-3 links on the floor at lockout, regardless of the lift you’re performing.

If the chain is too far off the floor they will sway too much and could cause you to lose your balance or not even deload the bar at all as you descend. If too much chain is on the floor, the bar isn’t heavy enough at lockout. Both lead to wasted valuable training time.

Now, as I mentioned before, accommodating resistance is mostly used for advanced lifters. But it is also very useful for beginners and people who are a little more banged up. For beginners, it teaches them to stabilize the bar better, control the eccentric and makes it lighter in the bottom position where form typically breaks down. 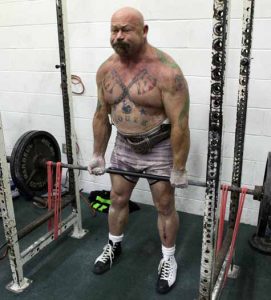 For beat up lifters, lightening the load in the bottom position can certainly be a plus.

So you don’t have to be advanced to implement the use of bands and chains. Just know how to use them and why you’re using them.

Either way, if you use them properly you will sure as hell make a ton of progress.

Thanks for reading, folks!